Every so often we hear of a story that is so horrendous where an animal is in such great need that we simply can not turn our backs! On Feb 3, 2013 we got an urgent call from a woman telling us there was a tiny dog living in an abandoned yard after the house had been forclosed on for nearly two months. But wait the story get’s worse. In December 2012 a breaking news story aired about a poor elderly grandmother that had been stabbed to death by her 22 yr old grandson! Yep, these two stories have a connection!

Apparently the family came and picked up all of this woman’s belongings and simply did not have the decency to take the her tiny dog with them. They just left this tiny, senior 6 pound Chihauhau to fend for himself! When we found out about this terrible situation, he had been there for nearly two months out in the cold and rain with absolutely no shelter! Can you imagine they left one small bowl of water and one bowl of food!

On Feb 4, we went to the location to rescue this little guy that we named Potato Chip. What we found was a pathetic little scared man coughing and wheezing terribly. He was so scared he was growling and tyring to bite us. We lured him with hamburgers, (it works every time) and were able to get him out of that nasty yard. A wonderful woman named Jeanette and her sister had brought him a little doggie house and some baby blankets for the last two nights her was there. They had also been bringing him some kibble.

We got him to our vets for urgent medical care and treatment! This poor little guy has been so neglected for such a long time and is also scared to death. It’s going to take awhile before this little guy learns to trust again, he has been through an unthinkable nightmare and has suffered from extreme trauma!  He does have a very bad heart condtion, disc disease,  a collapsed trachea and an intestinal infection. We are still urgently trying to raise funds for his ongoing medical care.

If anyone can make a small tax deductible donation towards his care, our pay pal link is:

https://www.paypal.com/cgi-bin/webscr?cmd=_s-xclick&hosted_button_id=8FAGPRXQ9X4MG
donations can also be sent to:
The Pepper Foundation
3940 Laurel Canyon Blvd. # 735
Studio City, CA 91604
Here is the article that tells what happened to this woman, terribly sad and tragic.
http://latimesblogs.latimes.com/lanow/2012/12/grandson-arrested-bbq-fork-stabbing-grandmother.html
thank you so much you guys, will be updating his info! And for daily updates please check out his fb page! www.facebook.com/potatochipsjourney
Sincerely,
Julie Chadwick
The Pepper Foundation
www.facebook.com/thepepperfoundation 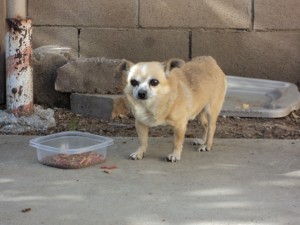 Left alone to fend for himself! 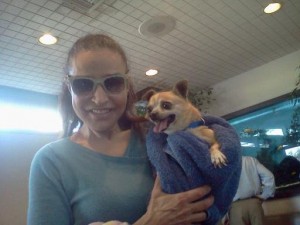 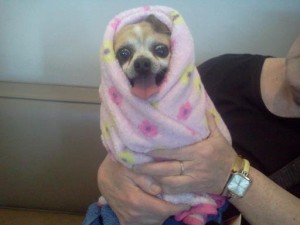 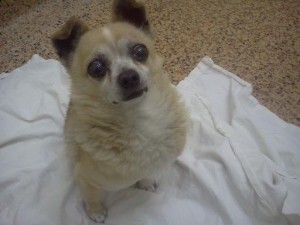